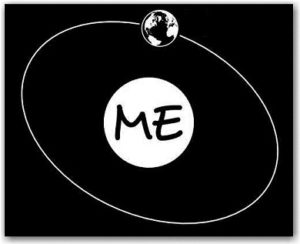 I often reflect on what a dickhead I was when I was twenty. My friends assure me I wasn’t actually a dickhead when I was twenty, but the guy I see through my mind’s eye was definitely dickish. Why? Specifically, I’m amazed at how grossly self-centered I was. And I didn’t even realize it.

Yes, Sunshine, that’s true, although I can point to my friend Nicole as an exception. More on that later.

Turns out the Holy Bible has something to say about this. I invite everybody recite my favorite Bible chapter with me,

I reasoned like a child. But eventually, “I put the ways of childhood behind me.”

We try to teach children to be unselfish, but it’s difficult – because their brains aren’t quite ready to reason like adults.  And we cut them some slack, but not so much that they never learn. Even the framers of the US Constitution recognized this and set the youngest age for a Representative at twenty-five. Which, coincidentally, is the age at which modern research says the male brain is fully developed. Yes, women get there sooner – a surprise to no one.

Hopefully we’re all much less self-centered than we were at twenty.

Well, Sunshine, I’m glad you asked. It’s about us. When I die, what will I leave behind? All that will be left is how I affected those I interacted with. If I have made the world a better place for those who come after me, I have lived a good life. Wealth is irrelevant, fame is irrelevant, and power is irrelevant – all three disappear as if they’d never been. All that remains is how you’ve used your life to improve the world around you.

“Wait, no, that’s not true. If I’ve worshipped Jesus, and accept him as my savior, I get to go to heaven.”

Really, Sunshine? It seems our man Jesus has a different opinion on that.

“Not everyone who says to me, ‘Lord, Lord,’ will enter the kingdom of heaven, but only the one who does the will of my Father who is in heaven.”

And what is that will? Love God; love your neighbor. Do that and you’ve made the world a better place. Easy peasy.

So don’t beat yourself up for thinking like a child. Unless you’re an adult… in which case you might think about using reason instead of emotion. Not just because it’s in the Bible… but because it makes the world a better place.

Oh, and Nicole thought she was a dickhead, too.