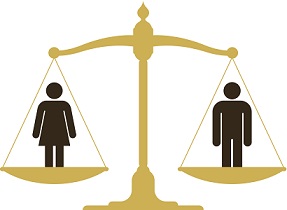 Women are not men.

I know this comes as a shock to some of you, but there are differences between women and men. Some people embrace these differences while others seek to minimize them. No problem, live and let live – right?

That’s easy to say if you’ve never been the subject of sex discrimination.

“But men and women are different, you just said so. It’s okay to discriminate based on those differences.”

Of course it is, Sunshine. US courts have actually determined that it’s okay to discriminate between sexes. The perfect example is it’s 100% okay for stage producers to hire only women for female roles. It’s also okay for resorts to hire only men to work as attendants in men’s locker rooms. It’s fine for single-sex health care facilities to hire only that sex. Hooters, in fact, is allowed to hire only women as servers because they successfully convinced a court that being female was a “Bona Fide Occupational Qualification” (BFOQ). No, I’m not kidding.

Great. What does this have to do with Bible-y things?

I’m not going to list the full text, but check out Ephesians 5:23, 1 Peter 3:5-7, Genesis 2:22, and my absolute favorite, 1 Tim 2:11-15, which says, “A woman should learn in quietness and full submission. I do not permit a woman to teach or to assume authority over a man; she must be quiet. For Adam was formed first, then Eve. And Adam was not the one deceived; it was the woman who was deceived and became a sinner. But women will be saved through childbearing—if they continue in faith, love and holiness with propriety.”

To paraphrase, Paul says, “Shut up and submit. You can never be in charge, so shut up. All man’s woes are because of woman. But to make up for it, you get to suffer through childbirth.” That passage led one of my bible study friends to utter the timeless and pithy observation, “Paul is a dick.” Every one of those lines is degrading and insulting to women.

It’s amazing to me, sometimes, that any women are Christians.

But take a deep breath and relax. Who comes to the rescue? Paul himself. In Galatians 3, Paul totally contradicts himself and says, “There is neither Jew nor Gentile, neither slave nor free, nor is there male and female, for you are all one in Christ Jesus.”

If you ask me, when Paul wrote that first nutty bit to Timothy, he was just having a bad day. Cut the man some slack, he had a lot going on.

“But if Paul contradicts himself, how do we know which one is correct? Because the Bible is flawless.”

Well, Sunshine, that’s easy. Try this exercise: Imagine Jesus being an asshole toward women. Can’t do it? There’s your answer.

What? Still not satisfied? Okay try this: Imagine God, the all-loving creator of everything, downgrading half of his children to sub-average status.

I guess you’re entitled to your opinion, whatever weird-ass god you believe in.

So yes, women are not men.

I thank God for that every day.

2 thoughts on “Adam’s Most Excellent Rib”