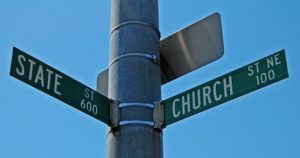 The United States has a 230+ year history of separating church and state. Most of our founders and most of our leaders have historically supported this separation. Clearly this is not a unanimous view among Americans.

The United States is NOT a Christian-based country even though a majority of its citizens claim Christianity as their religion. Neither the Common Law nor any state or federal statute is based on religion. Here are a few observations on why this is true, good, and necessary:

1. “Congress shall make no law respecting an establishment of religion, or prohibiting the free exercise thereof….” This is from the First Amendment to the Constitution. Perhaps the most important of the rights enumerated in the first ten amendments, the text makes very clear that Congress, as the sole agent responsible for creating federal laws, has NO authority to pass religious-based law. Any would-be law that is based in religion would immediately run afoul of both clauses. Law must be based on non-religious premises such as public welfare, defense, free trade, etc.
If that’s not enough for you, it’s a sentiment supported by everyone from conservatives like John Adams and George Washington to liberals like Thomas Jefferson… and this left winger:

“We establish no religion in this country, we command no worship, we mandate no belief, nor will we ever. Church and state are, and must remain, separate. All are free to believe or not believe, all are free to practice a faith or not, and those who believe are free, and should be free, to speak of and act on their belief.” – President R. W. Reagan.

2. Theocracies don’t work. They are, by definition, against personal freedom. In a theocracy, it’s “you’re free to think and say what you like as long as it doesn’t conflict with the national religion”. No thanks. I prefer actual freedom over whatever they call it in Iran, Saudi Arabia, and 17th century Spain.

3. Which church should we make part of the state? Judaism? Buddhism? Shinto? Islam? I hear none of those making a claim on the USA, so I’ve got to assume it’s strictly Christians who want this unholy alliance.
Okay, then which Christianity should we use? If we do it by the numbers it goes to the Catholics. Are you ready for a government that is, in one way or another, answerable to the Vatican? And if not the Catholics, who? Maybe we should return to the one national religion we’ve ever had here – the Church of England. Everyone agree on that?
And which Bible should we use? How about the Book of Mormon? Which version of the Ten Commandments? Should it be illegal to covet my neighbor’s 1981 DeLorean? Guilty!

4. Why in God’s name would any sane person want the same organization running the church as runs the federal government?

5. Laws are designed to benefit the common good through order and fairness (yeah, I know, it doesn’t always turn out that way). This means laws must be based on more than just belief – they must be based on actual, observable benefit. Murder is illegal not because God commands it; murder is illegal because it benefits society for murder to be illegal. God commands us to not have tattoos or wear clothes woven from two fibers. Should those be illegal, too?

The more I think about it, the more I realize that any politician who advocates the insertion of Christianity into government falls into one of two categories:
1 – Very Stupid. This person just can’t think rationally and we should clearly not vote for them.
2 – Very Smart. This person is using religion to get votes. This person is about as vile and evil (anagrams) as it gets. Using people’s religious beliefs to gain power is exactly why we need separation of church and state and we should clearly not vote for them either.

9 thoughts on “Lift and Separate”